Url Rewrite, one of the many modules that can be added on to the IIS web-server to make this a very versatile tool can be used to perform a variety of tasks, including allowing you to setup your IIS webserver as a reverse-proxy server to some other back-end HTTP or HTTPS service like TotalView. A reverse proxy is a network device that takes in traffic coming from the Internet (for example) and forwards this traffic to a backend server on your private network, allowing that backend server to be accessible to people who are not necessarily connected to your network.

Setting up IIS with URL rewrite as a reverse proxy with SSL offloading for a backend or Local TotalView server.

The Following tasks need to be performed on the TotalView Server or a seperate windows server:

Below is the diagram of the setup we wish to accomplish using IIS as a reverse proxy server:

The first step is to install the add-on module for URL Rewrite. With Windows Server 2012 R2, you can use the Microsoft Web Platform Installer (WebPI) to download and install the URL Rewrite Module. Just search for ‘URL Rewrite’ in the search options and click ‘Add’. You can also download the extension from IIS.net – http://www.iis.net/downloads/microsoft/url-rewrite .

Once the module is installed in IIS, you will see a new Icon in the IIS Administration Console, called URL Rewrite. This icon is present at the level or each site and web-application you have on the server and will allow you to configure re-write rules that will apply from that level downwards. 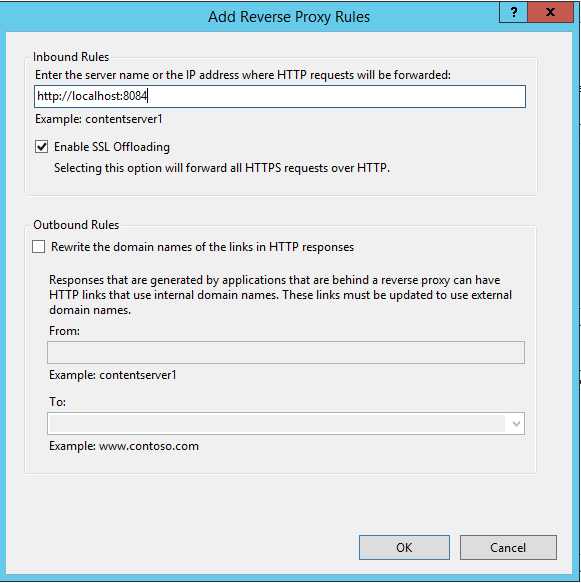 The basic setup for the reverse proxy is now complete, with IIS able to capture incoming traffic and forward it to the backend server.

Did you find it helpful? Yes No

Send feedback
Sorry we couldn't be helpful. Help us improve this article with your feedback.